Warning, January 2010: This page is old. Really old. Some of it goes back as far as the mid-1980s, to the days of BITNET. You should really take the information on this page and my related pages with, like, a salt mine of salt. I've barely touched them in years. I'm still online, but spend most of my time on Twitter (@rwhe), various wiki, and so on. If you still end up thinking I'm a Satan-worshipper or something, as certain family members who have googled me do, well, (a) don't say I didn't warn you, and (b) come back and reread this warning message. (I was never a Satan-worshipper, in case that needs clarification.)

See below for links to my mailing lists, my latest projects (including my software), my friends' pages, my Short-Duration Personal Saviours, and a slew of Web resources on a variety of suitably weird topics. 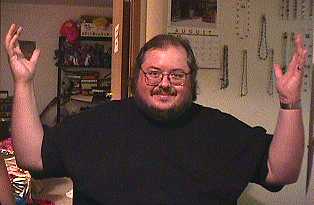 Long before there was an IRC, O Best Beloved, and certainly long before there was a WWW, there was a relay chat on Bitnet. People on Relay used to send each other short "ID files" or autobiographies to facilitate getting to know one another and to prevent having to repeat themselves every time they netmet a new person. This home page has gradually evolved from my old Relay "ID" file.

Stuff to know About me

At this writing (June 2001), I'm living in Kent, Washington, a suburb of Seattle. I was born in New Jersey, where I lived till I was about 11, moved to Connecticut, where I lived until I left Yale and moved to Boston. I lived in Boston until about 1994, then moved to Marty's home town, Lexington, Kentucky (where, contrary to popular belief, they do wear shoes, but never white ones until Keeneland opens). I then moved to the Seattle area in 1996, where I hope to stay a good long time.

You might know me from the small press. From 1989 to 1993, I edited and published a zine called Singularity. These days I'm mostly writing for a Net audience; in the 1990s, though, I was published in zines like (the defunct) Crash Collusion and FringeWare Review. (You can see a list of my prose sales, where to read 'em, hear about my current projects, and see some of my writing and software on my Projects Page.)

I'm interested in: magick; Esperanto and other constructed languages (I speak Esperanto pretty well); dreams and dreamwork; writing; computing (including programming); science fiction; inherently bogus religions (including my own brand, ParadoX OrthodoXy, but Hail Eris and Praise "Bob" anyway!); the I Ching and Tarot (I run an I Ching mailing list); hypertext and interactive fiction; SCUBA (qualified for my license but procrastinated on the paperwork so much I now have to take the test again -- it may be just as well, since I learned a medical condition may make it unsafe for me to dive); juggling; the Voynich Manuscript; kids; Nomic, the self-modifying metagame; nanotechnology, becoming transhuman/posthuman, and cryonics; mnemotechnics (the study of how to remember better) and "lightning math" -- I'm training to become a Mentat; recreational math; memetics (the study of infectious ideas); board games, card games, and role-playing games (for a while I was running a hybrid Chaosium game I called "Superheroes Against Cthulhu"); and Hermann Hesse's Glass Bead Game.

I considered myself a Zen Buddhist for a long time. I grew disillusioned with Zen, which claims to have no dogma but (at least in the school I trained in) can be quite ridden with it. I've also studied Qabalah, which at least makes no claims of being "beyond name and form," or rather admits that form plays a significant role in its method. After rediscovering the medieval Zen master Bankei, though, I'm growing interested in Zen again.

I was ovo-lacto vegetarian for over six years. I fell off the vegetable cart in July '93, largely as a result of my dissatisfaction with Zen. I vegivacillated for a few years, but have been pretty consistently omnivorous in the new millenium.

I identify as bisexual. We Await Silent Tristero's Empire.

...are on their own page, with WWW links for most.

"Tinfoil" is the name I use on IRC, MUDs, and the like (on the IRC #Esperanto channel I'm StanFolio; on Divination Web and some BBSs, I'm Fr.S.F.. I chose the nick "Tinfoil" when I was a kid during the CB craze of the 70s. I was playing with a pair of walkie-talkies outside my school when I saw a decoration in the window made out of foil. My cousin asked me for my handle. I said instantly, "Tinfoil". Now don't ask me again!

"StanFolio" is the Esperanto translation of "TinFoil"; "Frater S.F." came from the fortuitous observation that "folio" means "leaf" and that "stan" sounds like "stone," thus generating another cross-language Joycean stone/leaf, Cain/Abel, yang/yin, time/space punning dichotomy/pairing. (This concept is one of the least slippery ones in the Wake.)

Pages into which I've poured my blood, sweat, tears, and other precious bodily fluids.